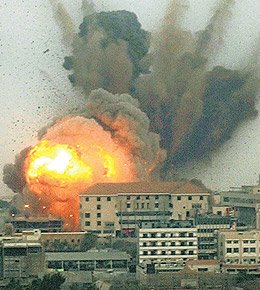 Now I know my most recent blogs have been a little more on the lighter side of life, but I have some thing a little bit more serious for today...

I heard an interesting thing on the news the other day regarding the fighting between Israel and Lebanon. The dude (I think news presenter is the correct term) was saying that many churches have called on the government to call for Israel to have a permanent cease-fire, which seems fair enough, but then the minister of something in our government said that if we were to just call a cease-fire it would stop the fighting but that it would not solve the problem.

Well this got me thinking...Is just stopping the fighting enough, yes, no one gets killed for now, but is better to let them go and sort themselves out so that some form of peace is found, not just enforced. Now I am not saying at all that its right for them to fight or that innocent people should be allowed to just be killed, but if peace is just enforced, won't the fighting just become less o

bvious? Won't more people be killed in the long run? I don't know, and I don't think there is a right answer, its kind of a bit like this...Do you do the greatest good for the greatest amount of people, by continuing to evacuate, but letting the fighting continue, or do you do a band-aid solution and fix it for now, but not for good?

I think the answer here is this:
Violence fixes nothing.

You say that peace will be enforced if a permanent cease fire is placed, but it will just mean that a more civil way of fighting for freedom etc will be enforced. Why can't these countries just sit down and talk about things? I know I'm making it sound like a friggen family meeting, which obviously is not the case- its definately more complicated than that. But if either of the countries want their people to stop being killed off, they have to stop the ridiculous amounts of violence.

I think that if the countries keep fighting, eventually peace will be enforced, but in the worst way possible. One country will have power over the other.

Its a cease fire, not a cease communication.

I often find myself wondering why I can see how simple it can be... how easily I can see that using weapons and violence is so obviously not the best thing to do. Pride just gets in the way I suppose.

Say a customer came in to Billy Hydes and we couldn't possibly negotiate any price with them. The object of the whole thing is for the customer to buy the product and for us to sell it. If the customer turns away cos the price isn't low enough for them, the natural thing to do is to get more money and come back. Not hurt Billy Hydes.

Both countries want something of the same nature. Peace. I'm sure there is a way of getting that, even if it means swallowing your pride for your country.

You are very wise Lauren,

What's with the serious post Emma? I'm not in the 'serious' zone to be able to really comment. I have nothing intelligent to say. I think Lauren has said it all anyway.

i'm always scared to weigh into debates i can't solve, if i could fix it i would tell people what to do, but if people where influenced by me i would say that i don't think that violence is the way.

I don't know much on the topic of old testament law, but i may offend a few people on this one, so if i do i'm sorry for being the devils advocate.

I couldn't decide where to start reading the bible so i started at the start.
In exodus God calls upon all the faithful Isralites to wipe out those amongs them that have turned away from the truth, for worshiping idols at the base of the Mount Sinai, in his name.

Is it posible that they think they are still doing what god has called them to do so many years ago.

I am confident that the God of love that i know would not have told them to do this today, but everyone interprets diffently. and maybe some leader over there has misinterpreted.

Sorry that is a blog in itself.

Dave I think that you should have a blog of your own... not mine!

Seriously you have some great insight in that big head of yours, and some crazy stuff too, let it out for the world to see, don't hold it back, just posting comments. Let it be free. Stop killing that brain and let it out

I agree with Emma.
And I agree with Dave. It seems that quite often wars take place in the name of God. People claim and believe that it is what God wants. It does seem pretty messed up. Although, it really wasn't that long ago that the mainstream Christian church was killing people left, right and centre. It's amazing what people do when they get an idea in their head. They will do anything to try to justify it. From what I read of the Bible, it seems that since Jesus, this notion of killing people cause of sin and evil is gone. Grace takes it's place. That's what the world needs...a little bit of grace. The thing about grace is that it isn't really fair. We always want what's 'mine' or what's 'fair'. Grace really disregards this and doesn't seek vengeance. I don't know...people are friggen idiots sometimes...that is my conclusion.

I got in the 'serious zone'..but only briefly.

Sheesh, I wish I had some insight . . . . I kind of see where the Israeli's are coming from though and I don't have a lot of sympathy for Hezbollah. . . remember too that the modern nation of Israel is VERY VERY recent and if they don't fight for what they feel to be theirs there is EVERY chance they will again end up with no homeland. And the truth of the matter is that anti-Semitism still exists pretty much everywhere (gee just at work a few weeks ago the boss was complaining about a man who didn't pay his bills and suggested that the reason he didn't pay was because he was a Jew . . . . I'm guessing some of her Christian clients weren't great payers either but did you hear her slag them off????? Noooooooo). No Jewish homeland means nowhere "safe" for Jews to practice their religion and personally I think that'd be a backward step. I get a sense that while many Lebanese and Israeli's would happily "talk" the situation out to stop the killing, that Hezbollah aren't too committed to talking. The Middle East is a sad and difficult place. Sigh.

PS Dave - I think it has more to do with politics now than religion . . . I don't think the Israeli's are following an ancient scriptural edict as much as trying to survive and maintain their homeland

I thought the whole 'homeland' deal dates way back to the OT. The promised land and all that. I could be wrong, but I thought there was still some pretty strong links to religion. Yes it's about land but religion is what makes the land so important.
But I could be wrong...I don't watch SBS or anything. I'm not really up with world issues.