Well Easter has come and gone for another year…once again I have stuffed myself silly with Cadburys chocolate and completely stuffed my diet, but my goodness me was it worth it and I am also another year older since I last blogged! I know pretty crazy ey?

I am finding as I get older that Easter seems to be more and more meaningful but completely different from everything else Easter has ever meant before. I know that’s kind of weird but its true.

When I was little Easter only meant eating a lot of chocolate and hot cross buns. I knew about the story but it didn’t really mean anything to me personally, but now every Easter I am reminded just how much God gave for me… but not just for me for everyone, even people like Saddam Hussein and Osama Bin Ladin, people that hate Christians and I guess that just blows my mind. Seriously think about, would you really give your life for your best friend…I guess I would like to think that I would, but I don’t know, but imagine giving it for someone who hated you. It’s amazing! It’s a pretty amazing gift, coz really all we have done is stuffed up, and so Jesus has died for us, even though he did nothing wrong and was perfect, so that we can have eternal life and go to heaven. And there is no catch either, all we have to do is believe that Jesus died for us and the gift is ours. It seriously blows my mind. So if you haven’t already this Easter take a minute and just thank God for his sacrifice, coz its pretty cool, and without it we are all stuffed! 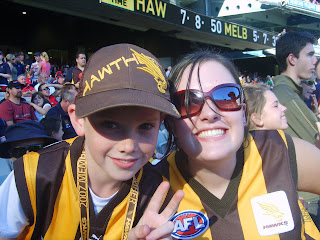 It also turns out that since I last blogged I have left another chapter of my life behind, I am now 20years old. I know, I know, soooooo old, but it’s true. But yesterday was my birthday and while I wasn’t really looking forward to it, because it was such a silly number and mum and dad were away I actually had an awesome day. It all started being woken up by Dave with one of the best presents ever! And then continued when he took me out to breakfast, which was just lovely! Then we went to the footy, which was awesome because the Hawks finally won a game and came up with the goods for my birthday buddy Brandon and I, much to dusty’s disgust! But I had a great time cheering on the hawks with Brad and Alicia and hanging out with the somewhat disheartened Melbourne supporters that came too! The guy sitting behind also made the game very amusing as all passionate Melbourne fans do! 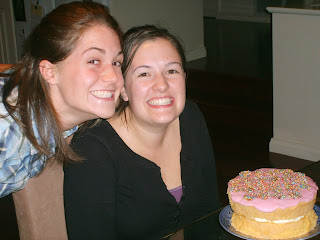 After singing the song through a couple of times, I went home and Kirsten picked me up and took me out to tea, where I had the best penne carbonara that I have had in a long time. Then we went back to her place and Sue had made me a cake and Pheebs and Kirsten, and Ryan and Dave too, made a big fuss, and it was the best.

So thankyou everyone that messaged me, or spoke to me, or saw me yesterday, for making my birthday such an awesome day. Even though I don’t like being 20, I am glad that I had a 20th birthday!

Here are a few photos… but there are more on my myspace...check it out. 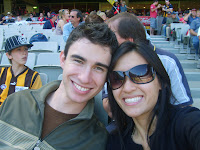 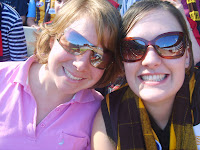 The Hawks' hawk and I 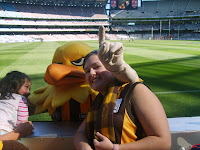 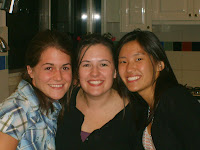 happy birthday em,
Glad u had a nice day

I'm glad your blog is still up and running! I must remember to check it out more often.