DAY 5
Today was my first full day in Beijing. I started the morning with a Chinese lesson to refresh my memory, during which I found out just rusty my Chinese is, but hopefully it will get better the longer I stay. I had forgotten how complicated the language is. I know that I know lots of words, but at the moment they are still stuck in my head where I can't find them. My Chinese teacher is very lovely and patient and I really enjoyed just having her there to talk to and to practice with.
In the afternoon i decided that is was about time that I ventured out of Dad's apartment and went for a little explore, so that's what I did. I walked to a place called "the place" and then checked out the silk market as well. At the place, Jake had told me there was a giant TV screen, so after walking through the whole complex I couldn't find it, i turned around and saw what I thought was the TV, which was huge, but then later I found out that the whole roof of the complex is a giant TV, so I felt pretty stupid for not seeing it and Dad and Zhang Wei (Dad's Driver) thought it was very funny.

For dinner Dad and I went to a great Dumpling house where I ate this very strange fruit, in fact I don't even know what it is called which means I can cross number 76 of my list. If anyone know what its called I would really like to know, the fruit is white with lots if little black seeds and tastes like a bit like a cross between kiwi fruit and cantaloupe. Dad seems to think you can get it in Queensland, but I am lost...actually I just looked it up on Google and its called Dragon Fruit, so there you go.
Psalm 119:37 "Turn my eyes away from worthless things; preserve my life according to your word"
DAY 6
Today I woke up and it was raining in Beijing, which is very strange but kinda cool because it doesn't happen very often. Apparently it even snowed in the mountains which doesn't really surprise me because today it was also freezing cold. 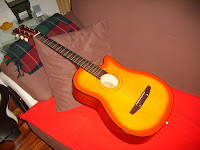 My day started with another Chinese lesson, which thankfully went better than yesterday, I think that my Chinese is slowly coming back which is good, because I have decided that I would really like to be much better at Chinese than I am currently. I think that it would be really great to have a second language that actually worked, rather than one the stops and stalls all the time. So when Zhang Wei and I went out this afternoon to get a guitars, i was able to practice my Chinese more with him, which was heaps of fun.
Then this evening I went across to the gym, which is also known as the Alexander club, and went for a swim. Little did I know that this particular gym is quite fancy so when I go tomorrow I will be a little more prepared so that I can soak up all its luxury. I guess today sounds pretty boring, but I actually had a great day, I really like being in china and being able to try new things and practice my Chinese, its also been really relaxing, which has been a nice way to wind down after such a busy semester!
Psalm 19:3 "There is no speech or language where their voice is not heard."
Posted by Em at 11:41 PM