Kat came back from overseas and I was s 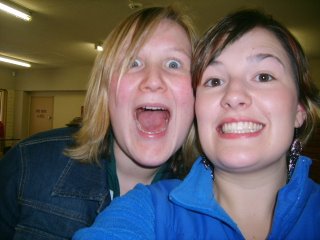 ooo excited so on wednesday night for cell we went to the city and got gelati and it was great. Even though she was only away for like 10 days I tell you what I missed her. I think it may have had something to do with not saying goodbye and forget that she had gone because it all happened so fast. All i know for the whole time she was away I kept going to things expecting that she would be there and she wasn't so I got really dissapointed. Anyway it doesn't matter now coz she is back!

Anyway I know it probably means nothing to you but it does to me and this is my blog so deal with it! Welcome Back Kat... you have been missed.

I have also missed Kat. She is my favourite person in the whole world. I love her! I want her to be the mother of my children.

who are you secret admirer...you can't love her that much if you won't even let her know who you are...be brave...i think its time

It's hard to love someone when you don't think they will love you back. Kat never notice me or pays any attention to me. I could say who I am but Kat would probably laugh. I wish I could tell her, but I jsut don't think I can do it.

What are the chances you could give us a few clues as to your identity?

I am concerned that you might have had a brain fritz or something - your quantum leap in logic at times is a challenge to follow but as you said -
It is your blog !!

I don't want to give any clues away. I am Kat's secret admirer and I would like it to stay that way. I know that I would acheive nothing by disclosing who I am. I'm sure that Kat does not have any interest in me. So why bother going through the pain of rejection?
Maybe one day Kat will notice me and my true feelings can be shown.

If you don't want to give any clues away, I wouldn't make comments on Em's blog if I were you. You may think you're anonymous...but people will eventually put two and two together.