Okay, so the war is back on with Billy Hyde after a very job threatening email that was sent out to all staff about the “appropriate use of the work computers, internet and phones”. I am sure it wasn’t just sent to scare me, I am sure that I am not the only offender, but lets just say, I was a little intimidated, but by no means defeated, so in response my method has changed hence I am typing this (still at work) in word, and I will transfer it, well actually if you are reading this I have transferred it and its now on my blog… I told you before Billy Hyde, I WON’T BE SILENCED

Anyway, lots of funny things happen to me, but most of them never make it to this blog, sad I know, but it’s true, but the other day something very unusual happened and I kind of feel it do my whole blog site a discredit not to post it…

What could have happened I hear you ask????

Well let me tell you…

As most of you aware (only because I have mentioned it one or two times in the last week) at the moment I am in the middle of my exams, well in terms of timing…not it terms of quantity.

So of my 4 exams I have had one, and I have 3 next week, I know I should be studying not bloging but what can you do? Anyway, this story comes from my first exam, let me set the scene for you…

I am sitting quietly, actually in silence, in my exam, we have had our 15 minute reading time, I have been through that time were you pack your dacks because all of a sudden you can’t remember anything and then regain your composure, I have completed my 30 multi-choice questions and am just starting my extended answer questions when in the distance I hear a ringing, a little like a fire alarm, figuring its some where else and that I should keep working on my exam I put my head back down and continue to write, but then I am very very very rudely interrupted, I know, in an exam, shocking, All of a sudden the speakers in the exam room of about 110 people ( I am not sure exactly, but you could probably ask flick coz she is always near the end, if you really want to know) come alive with a….

Can you imagine?? With this everyone kind of sits up and starts looking around, and kind of wondering if we are supposed to move or wether we stay. So we are just sitting there and the head supervisor, one of the ones that lets the power go to there head and looks down on both the other supervisors and the students, announces, “I’ll just find out what is happening” and toddles off to the chief supervisor room. After a few minutes he returns, and says…”there is nothing to worry about, there is nothing we can do…just keep writing” Can you believe it???? Just keep writing, are you serious???? But that’s what we did so for the next twenty minutes we all tried out hardest to concentrate and “keep writing” with the occasional giggle, and a “I don’t believe this” or a “this is ridiculous”

But in the end it stopped and I finished my exam, so everyone, well at least I was happy. Although if you ask my dad, he will probably tell you that the siren is all just a part of the instability that is Emma at exam time. But I want to tell you that it was real (again check with flick if you want) and that the instability is not just something that happens to me, it’s genetic. 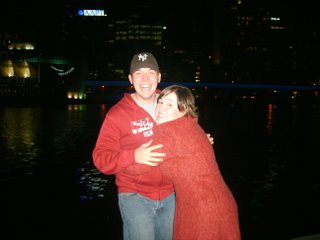 How can I tell??? Well at the moment, Dustin my brother, along with hundreds, well probably thousands of other people all over the state is doing year 12 exams at the moment, and the other day in a moment of insanity Dustin and I spent about 15 minutes running around the house in hysterics, because I wanted to know what CD he had in his hand and he just didn’t want to tell me, needless to say, he is also very unstable, but I guess I also just wanted to say in a big sister kind of way, even though he will hate it, that I am proud of you Dusty… you have worked soooo hard and I hope you do really well, because you deserve it.

Just a thought I had…

I would just like to confirm for everyone out there who is interested that there were 110 people in the exam (me being seat number 106 and there being 4 people behind me). Emma, how on earth did you remember the exact number of people in our exam? I know I have good reason to remember being so close to the end and for having a memory from random useless bits of information.

I would also like to confirm that a fire alarm did actually go off in the middle of our exam. I never thought I would see the day when almost everyone was distract and almost laughing in the middle of an exam. I might even go to the extent of saying that the alarm was actually somewhat relaxing. You may think that this sounds quite weird, but it's true. For those 15 minutes or however long ever long it was (felt like at least 20 but could have been as short as 10) you didn't feel like you had to actually work and if you tried and actually got words written on paper you felt as though you had accomplished a great achievement.

But seriously I have been at uni for 2 years and it all that time what's the chance that the only time the fire alarm goes off is when you are in the middle of your exams. I think the biggest thing that happened at uni was at the start of this year when the power went off (I'm pretty sure it was campus wide), but it was during one of my breaks and it come on before I went back to class, so I didn't miss anything.

Maybe I should have just written my own blog...but then I would have nicked off with Emma's topic.