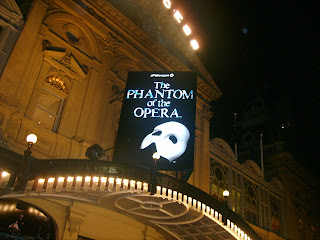 Last night I was able to knock another thing of my list...because last night I went on a hot date with the man of my dreams, and he took me to see the Phantom of the Opera, not before picking me up dressed to impress and cooking me a beautiful dinner!
It was a lovely evening and the musical was fantastic! There was a little drama as when we took our seats we were politely informed that "for tonight's performance the part of the phantom would be played by Simon Price" not Anthony Warlow as advertised on everything! But I did find out today that he is actually very sick, so I understand and I forgive him...but I must say the other guy was very good and I probably wouldn't have noticed the difference anyway! Seriously though, the performers last night were amazing...I had never actually seen the full play before even though it is on DVD, and I think that made it even better because I had a very vague idea of what might happen, but not the complete picture so it made it so much more exciting, so if you are in Melbourne at the moment do your self a favor and go and see it! Its heaps good!
Just on the side....Last night when I was taking some pictures of my lovely night out I noticed a banner advertising the musical that stated "The World's Greatest Love story"!

Now if you know the story of the phantom of the opera...would you really say that it is the greatest love story...yes there is love, but this love is full of pain, its a love that drives a man insane, causes him to do things that he probably wouldn't have done other wise. I guess it got me thinking...The Phantom's love was selfish and demanding and it was on his terms...that doesn't sound like a very good love story to me...it sounds like a good story, one of tragedy and despair but not of love...I think there is a better love story in the world, one of Amazing Grace and of Boundless Salvation...a love that only gives...a love that gave its life...The love of God...now that sounds like a love story...maybe even the World's greatest!
Just a thought I had...
Stay tuned.
Posted by Em at 9:26 PM